The air conditioning system on HMAS SUCCESS did not meet the ships full load while operating in tropical environments. This condition was exacerbated by additional heat loads caused by ship modernisation activities. Areas affected included mess decks, office spaces with LAN and desktop computers and Communications and Operations rooms.

SOFRACO completed a full assessment of the system while at sea in the tropics and ascertained the heat load of the ship configuration to the appropriate defence standards. The company noted additional problems that contributed to poor performance including piping issues, dirty coils and ductwork problems and provided solutions to these problems as part of the assessment. 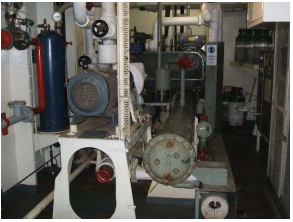 As a result of the assessment, SOFRACO provided four engineering options including the replacement of the main chillers in an extensive report that was subsequently used as the basis for the detailed system upgrade design.

Model of one of the Preferred Replacement Units