The RAS System is a critical component of the Underway Replenishment (UNREP) capability which is the primary mission function of the ship.

During EMA 08 SOFRACO carried out maintenance on the RAS System for all the deck equipment including but not limited to:

SOFRACO removed all the winches and deck equipment from the ship that, in total, weighed over 200 tonne. 130 subsequent Problem Identification Reports (PIRs) identified substantial system degradation with numerous items rendered inoperable and unsafe for service.

SOFRACO subcontractors on this project included:

After the repairs were completed SOFRACO performed the system set to work and functional test with a representative from the system OEM (Hepburn Engineering) that SOFRACO represents as the Australian agent. On the request of ship’s staff, SOFRACO provided personnel to assist replenishment at sea tasks. 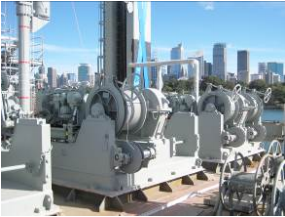 Failure Analysis
It was evident that majority of defects were due to a lack of routine maintenance on critical moving parts. This could be attributed to inadequate safe accessibility for some components whilst at sea. As a solution SOFRACO proposed the installation of automatic lubricators. These were installed as a pilot project in February 2014 and SOFRACO with ship’s staff are currently monitoring the system condition to assess their effectiveness.